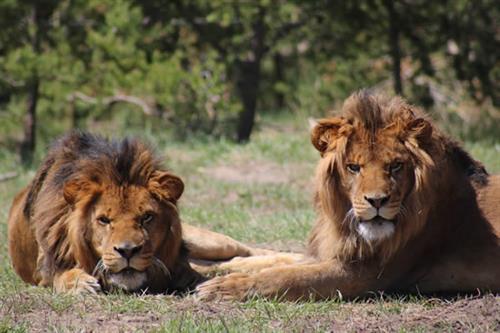 10-Acres of Lions, Hyenas, Monkeys, Bison and More! Plus a New Train to Take It All In!

Award-winning Safari North Wildlife Park is set to open and this year unveils NEW attractions. The park, which features more than 150 species from six continents, will give guests an up-close look at species specific to the African Safari in its new exhibit titled: Expedition Safari. Animals featured include lions, hyenas, monkeys, zebras, wildebeest, ostrich, Eiland, buffalo and more!

AND, also new this year is a locomotive train guests can ride through the new Expedition Safari exhibit!

Also coming this spring/summer, Safari North will be the only zoo around with cheetahs, which are part of the park’s big cat offerings that include tigers, lions, jaguar leopards. This large cat native to the mountain ranges of Central and South Asia is listed as Vulnerable on the IUCN Red List because the global population is estimated to number less than 10,000 mature individuals and is expected to decline about 10% by 2040.

Founded in 2014, Safari North Wildlife Park is the creation of Kevin Vogel and his wife Kelly. Together the two have more than 50 years of combined experience in the field of exotic animals. Prior to opening the park, the couple spent 20 years traveling the Midwest with their petting zoos, camel rides, pony rides, pig races, and wildlife educational shows. Safari Wildlife Park has been named #1 for Best Summer Family Fun in the Brainerd Lakes Area by the Brainerd Dispatch for TWO years in a row (2018 and 2019) and also named #1 Spot for Relaxation in 2019.

The mission of Safari North Wildlife Park is to promote life-long learning, conservation and preservation through safe, affordable, and memorable experiences with animals of all types. The park specializes in up close and personal experiences with the animals as well as important information about every animal including its history, care and the conservation needed to keep it thriving.

“Our dedication to our animals is second to none and we are very proud of the care they receive,” says Kevin Vogel, Owner. “We see families come back year after year because of the experience we provide them and the animals. We love spreading our vast knowledge of these animals so we can all appreciate their place and importance in our ecosystem.”